Undoubtedly, this is the car to beat in the world of 1/10th scale offroad. It’s heritage is unmatched by another other manufacturer and has won 5 World Championship titles in a row! No other car has been able to claim the World Champion title since the B4’s release in 2003.  With constant performance updates by the team, it is poised to defend it’s crown yet again in 2013. Will it win another title before going into retirement with the long awaited B5 just around the corner? There is a lot of speculation that the B5 may make it’s debut at the 2013 Worlds in Chico, California, but there are also those who believe that Team Associated will decide to run the B4.2 because the platform is proven and it’s a platform that all the team drivers know how to tune very well. Either way, I’m for the IFMAR Worlds this year.

This article will follow the progression of the B4 over the years for those who are wondering, “What parts do I need to make my B4.1 Wolds C ar into a  B4.2?” or “Wait, what? There’s a Worlds Car?” Even though these updates might be subtle differences to some, each part or change that has been added to the kit has resulted in a championship winning formula. Maybe it’s time you refresh your B4 buggy?

In 2003, AE release the B4 Factory Team that came loaded with “Team” option parts. With the industry on a slow decline, the development of the car also followed suit. It wouldn’t be until July of 2010, the B4 would finally get it’s first major update known as the B4.1. Here are the differences below in a nice chart. The prices are based off online shopping and the “+” is my recommended upgrades for a stock Factory Team B4.

Team Associated decided to wait 7 years before releasing the B4.1, but with the advent of lipo’s and brushless technology the industry saw a resurgence in popularity that would ultimately drive manufacturers to further advance car design at a quicker pace.  In 2011 at the IFMAR World’s in Finland, the B4.1 would claim it’s 5th World title and with that AE wanted to commemorate this achievement with a replica of Cav’s winning buggy and correctly named…….  The B4.1 World’s Car. From B4.1 to B4.1 WC only took just over a year. So here is a list for the B4.1 to B4.1 WC edition.

The major differences from B4.1FT to B4.1WC is the mainly the new longer 8mm chassis and the parts that come with it. I’ve “+” a few things that I thought is crucial into putting together a “race” ready B4.1. Without a doubt, the main thing here is the +8mm chassis. This was developed before the 2011 Worlds in Finland as a prototype, but having been victorious at Worlds, it now has become the standard chassis that all the team drivers use.  With a longer chassis comes a longer battery brace and body. Although I have “+” the brace, you can go with whatever holds the battery down. The old brace will hold the battery down, but just won’t look as cool. As for the body, I know a lot of guys that love the JConcepts Finnisher +8mm body and would recommend that, but stock body has got to be a winner too because the current world champ still rocks the Proline Bulldog +8mm body even though he’s no longer a Proline driver. Food for thought. Next let’s look at what the differences are between the B4.1 WC car and the newly released B4.2! 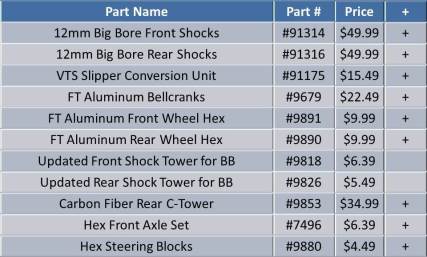 With the last edition in the B4 series (I am assuming) includes some significant updates. New Big Bore shocks, new slipper design assembly, new hex mounting system, and new C-tower w/lower ballstud mount for the going price of $279??? That’s just $30.00 more (also minus the tires you never use) than the kit it’s replacing! Without a doubt, whether it wins or it loses at the 2013 Worlds….it’s already made history. A  legacy.