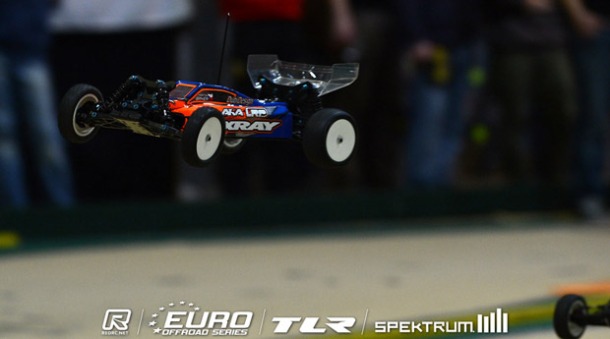 Having contested Round 3 of the EOS with 2WD Chassis’ from other manufacturers, Team Xray have come to the final round armed with a prototype of what could be the Slovak company’s first 2WD buggy.  Closely based on their XB4 4WD Buggy, which was only recently released, the prototype XB2 managed the 16th fastest time in the hands of Martin Bayer. One of the stars of the last round of the EOS where he claimed a podium double, the Czech ace said for such a new car the buggy is actually running pretty good.  Having only had one days testing with the prototype at Xray’s indoor test track at their factory prior to traveling to Germany, he said the new project is going to need time so they can learn how it reacts to certain set-up changes.  Team-mate Renaud Savoya said they didn’t have enough time to test the various set-up combinations on the new car but already he has a better feeling with the buggy than he did with the Kyosho he ran on his EOS debut at Round 3.  Suffering three costly crashes, the 3-time European 1:8 Offroad Champion set the 21st fastest time of the 117 car field but feels the set-up they went with for Q1 is going in the right direction and while he is no where near where he wants to be in terms of pace he is confident they can improve with each run.

Picture and write-up courtesy of the great people at RedRC and EOS coverage, who have the ability to attend such a great function!