Photos from NeoBuggy’s “Under the Hood” Series. Thank you guys for doing an awesome job and putting together probably the best coverage at the Worlds event in Chico, California. Please also visit their site for more info that covers just about everything RC car related. 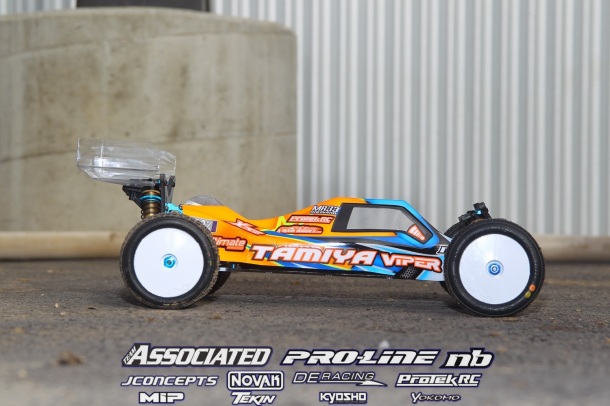 By popular demand…Here is Lee Martin’s Prototype Tamiya buggy which finished 2nd on the podium. This was Lee’s best drive at a Worlds level event…hell it was his best drive at a major race in electric racing period! It was good to see Lee doing so well as he’s one of the most popular drivers around the world. He’s right up there with Cav, Tebo, Evans, and Maifield!

It would have been awesome to see the Brit take it home as he was able to put his buggy in 1st place during racing, but with the high bite and super high pressure… Lee made a few minor bobbles and would give up the lead. Congrats to Lee on a strong drive and taking 2nd in a field filled with the World’s BEST!

So there is a growing trend running the low profile servos these days and Lee is one of those choosing to run the half pint servos. At this point, I haven’t really felt the desire to test a full size servo vs a low pro servo yet, but maybe it is about that time. Would less weight equals faster car? Does it take away steering b/c of the loss of weight over the front tires??? We will have to see about that.

Anyways, the new prototype car gets an aluminum stretched chassis which is nothing new considering the design trends of today’s 1/10 scale cars.  It kind of resembles Kyosho’s RB6…….. which kind resembles the 22…….then the Yokomo Bmax2… even the C4.2 and Schummy. The only car that is left on a plastic/composite tub is the? Can you name it? Serpent’s new 2wd buggy! 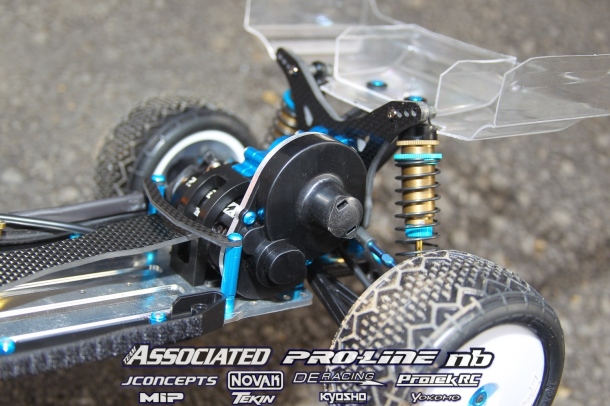 From this angle, Lee is running his LMR wing that looks basically like a double wing or kind of like a mini wing sitting on top of a regular wing. I’ve been wondering when wing aero advancement would take place since bodies have been moving in that direction. I think we will see more double decker bi-planar wings with adjustable air slots and as well as more vertical fins for rear end stability in the near future. The strive for the performance edge never rests! 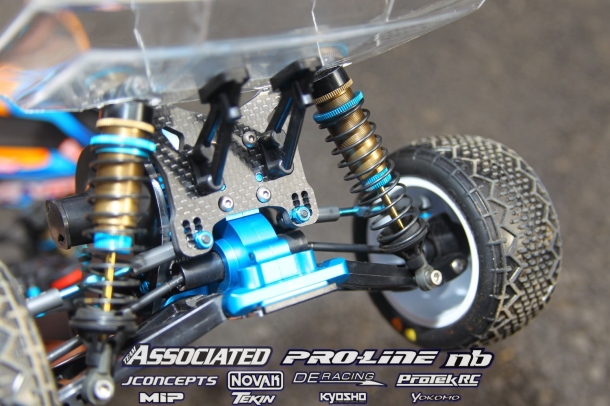 This rear end picture is quite neat b/c it shows the design of the Tamiya car being a bit different than the rest. There is no rear bulkhead as the rear shock tower bolts directly on the aluminum transmission case. It saves weight, less material, and less things to worry about breaking on you. I’ve heard that the rear bulkhead of the C4.2 is quite easy to break and this design takes that entirely out of the equation.

Another glance at the all aluminum transmission and what a beautiful piece of artwork! The color reminds me of GPM goods, but that’s okay. Since this is a prototype car, it is still unknown to weather the production model with have an aluminum transmission case, but who knows….Tamiya might finally have a winner on their hands here with this design since Lee did finish 2nd place at WORLDS. But something tells me they’ll make a molded version of this gear case to keep production costs down. 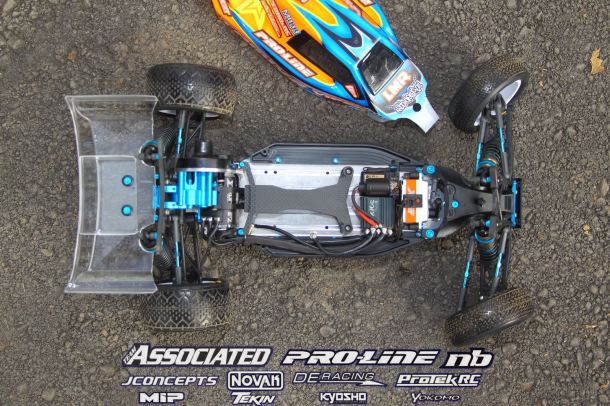 Congrats once again to RC’s favorite Brit, Lee Martin!!! Fantastic job and osooo close to winning a title. I have a feeling this really helped his confidence and I would expect him to actually win a few major races in the feature. He’s got the package now…Great job for Tamiya too!