I’m excited to review and test this nice, little product from Rocket-RC called the brass squat block. Specializing in mainly the TLR 22 product line, Rocket-RC has a list of upgrades to help increase the performance of the TLR cars beyond TLR’s own great list of upgrades. As of now, they are direct mail order and relatively unknown to most racers unless you follow the 22 buggy thread on RC-tech.

I’ve been wanting to do this review for quite some time as I heard through the mysterious RC grapevine that this piece is magical. Let’s see if this really is one of those “gotta have it” parts and if this is indeed the real deal Holyfield. Inquiring minds wanted to know!

Out of the box, the TLR 22 2.0 rear motor car is a real contender. You basically have a PRO caliber car that truly is at the world class level. With most other kits, you really have to spend an extra $200 to $300 dollars on upgrades to get what the pros got… for example the Cav-mobile. Finally, after 33 years of racing and development, TLR revolutionized the rear motor design by making a kit so darn good right out of the box.

Recently however, because of the new performance trend that happened with mid-motor, the platform really rebooted 1/10 scale off-road car design. It reset what all the manufacturers have learned over years and years of R&D and literally put everyone back to square one. We are at the beginning of a whole new revolution in the 2wd buggy — the mid motor car.

With that said, the soon to be released B5M will showcase Team Associated’s interpretation of how a mid motor car should work. Even teams like Xray and Serpent have jumped in and designed their own mid motor car. Team C has like 3 variations and Schumacher 2! About the only proven design so far is the newly crowned champ… the Kyosho RB6. By winning the Wold Championship title in 2013, Jared Tebo captured the first ever Wold title won by a mid motor car. By merit, Kyosho can claim they had the best of the mid motor cars in 2013, but from a design standpoint this platform is still a new frontier which only means one thing……… progression.

Now on goes the brass squat block!
Installation was straight forward. It’s a direct replacement for the stock piece meaning you have to transfer over your anti-squat shim and spacer and you’re done. Total time took about 10 to 15 mins or so to install. Btw, if you didn’t black grease some of the tranny screws you might have a sore wrist and/or stripped screws as those can be really tight! Grease definitely makes it easier to wrench on and saves on stripped heads.

Quality Impressions
The overall quality is nice. It’s machined out of a pure block of solid brass and weighs 32 grams heavier than the stock suspension mount. Unpolished, it still has a nice machined finish to it which I don’t mind at all. I like the fact the piece still looks raw like it was just cut from a highly skilled machine shop — because it was! I feel pro just having it in my hand! Unfortunately, it’s a part you normally wouldn’t see so cosmetically just adds a little visual bling but that doesn’t matter right? What really matters is how it performs ON the car.

Testing Results
Without the brass squat block, my hero laps were 16.0 and the majority of my laps would be in the 16.2 – 16.5 range. I ran half the afternoon and made changes to my 22 trying to get it the best it could be in the amount of time I had. Much like I would on a race day. With each pack I made small changes and the car was getting better. Although it had a slight on power push, I probably could have sanded my fronts a little lower to get more steering….but the car was capable and pretty quick. The only thing I had on the car that wasn’t box stock was the aluminum mid motor camber block, part TLR2061.

My impressions WITH the brass block on my car was WOW! Instantly, I could feel the car drive totally different! By adding more than an ounce of weight to the rear of the car, it transformed into a whole new beast. It felt more like driving a rear motor car! I could whip around 180’s with more corner speed and more importantly, with more predictability. After calming myself down, I wanted to see what kind of lap times I could do with it and here is what I got. Fast lap of 15.7 and a good range of 16.0 and 16.3. Yep it was faster and felt better.

This might surprise some of you, but it actually gave me a touch more steering while locking down the rear. It may not make sense but it has to do with rear end swing weight and the pendulum effect. By adding weight towards the rear of the car, you are effectively increasing the amount of energy being transferred in the rear when the front wheels are turned and centrifugal forces take over. Basically, the rear of the car is helping the front of the car rotate in an arc or circle. Without the brass squat block, the car feels like the tires turn and the rest of the car is just following behind. With the block, you can see and feel the rear weight shift as you go around corners. Also, another thing to note is with the weight is low and directly on the chassis, it doesn’t dump the suspension over making it hard to drive or inconsistent. On top of that, by adding 32 grams to the rear…. it moves the weight bias closer to the rear tires giving you more traction. More steering and more rear grip? Oh yes! 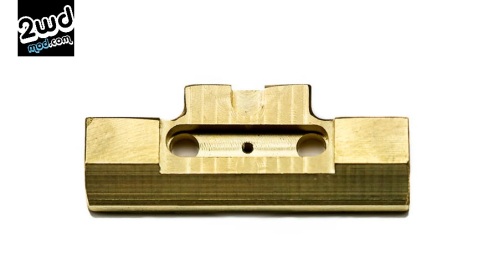 Conclusion
Without a doubt, this is one of the most beneficial upgrades I’ve tried on an RC car, let alone on the 22. Actually it was so good that it made me think about creating awards like a “Gold Award” or “Silver Award” for upgrades. I was impressed by just bolting it on and resetting the ride height, the car was better. To think if I were to tune the car with the brass in, I’m positive I could squeeze out even better lap times.

Here’s a quick list of what the PROS and CONS to this brass upgrade.

PROS
– Better lap times (although mileage may vary).
– Increased steering and steering consistency in tight, sharp corners. (especially in 180’s, more predictable upon mid and exit).
– Increased rear grip.
– Polish it up and it will look like 24k gold!
– Durable (more time will tell just how durable).
– Adds stability

CONS
– You have to wait a few days for it to come in the mail.

As much as I would like to not buy upgrades, it just isn’t going to happen in this day and age of performance RC racing. The question then is, which upgrades do I buy that will give me real performance? If you’re running a 22 in mid motor on USA dirt or clay, I’d definitely invest in one of these. For me, it did increase performance and that showed in lap times. More than just numbers though, it made the car more drivable and felt easier to push. I think this piece is one of the pieces needed to unlock the full potential of the TLR 22 in mid motor form.

From what I’ve heard, this is just one of the pieces in the puzzle. Rocket-RC makes a few other brass options that I know a lot of the pro’s are running these days….or at least have in their box as option parts. Time will only tell as the cars evolve with manufacturers constantly searching for the perfect mid motor design. It’s small companies like these that keep elevating the game to a whole new level. Progression can be quite addicting.