Here we go…. qualifying at the 2014 Cactus is finally underway and Arizona’s own, Ryan Maifield is running the long awaited B5M! This is the car’s 1st major race outing and I’m sure there are a lot of eyes on the new B5M and how it performs against the World’s elite drivers. Unfortunately, there are a few factors that are added to this year’s Cactus race (ahem like the sugar surface on an already uber grippy track) that will play a major role in the success of one’s outcome. Another being a lot of manufacturers are either testing or releasing new tires that haven’t been used in years past. Whether the tires are dialed or not, can heavily impact a driver’s ability to setup, be consistent, and perform. Either way, all the racers must endure the same situation so in the end……. fair is fair. Thanks to RedRC and their awesome coverage and please don’t hesitate to check out their event coverage or their chassis focus page! 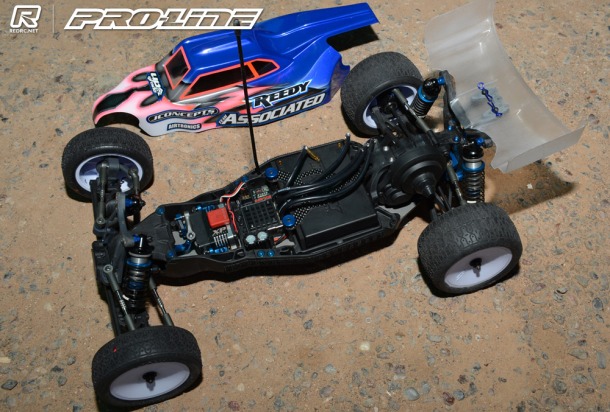 The quintessential B5M setup here! Reedy Square pack, black box Reedy ESC, full size servo….. all mounted in the standard position. It’s a bit hard to tell, but I’m willing to guess Ryan is running some of the optional “HD” plastics to reduce flex and add a bit of consistency on high bite. I’m sure we’ll find out soon enough when AE get’s a setup sheet up. 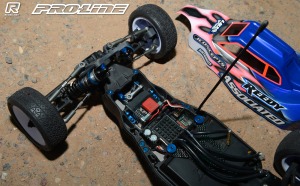 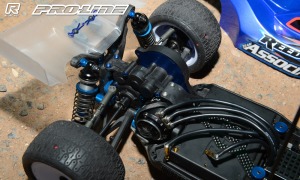 From the front end of the car, it looks like some aluminum blue screws?! Yikes…I’m not sure if I’d trust aluminum screws in high stress areas of the cars as I remember the purple anodized aluminum screw days, they’d break off in a heartbeat leaving you with a nice little headache. Finnisher titanium turnbuckles all around, aluminum shock caps, shock standoffs, and servo horn.

The rear of the car seems to be decked out with FT upgrades like aluminum front and rears suspension mounts, aluminum rear camber link, and hard to see aluminum vertical ballstud hubs in back. Maifield also chose to go with the FT carbon fiber battery brace as well to give it a nice, high tech bling look.

How long do you think it will take AE to release a Factory Team kit and how much?? Any speculators?