March 21st through the 23rd marked the final race of the epic Pacific NW Showdown winter series 2014. The finale was held at Four Season’s raceway in Olympia Washington….. home of Gary Brown, father to northwest legend, Scott Brown. Unfortunately, good things must come to an end and after a long winter the final race was upon us. Undoubtedly saving the best race for last, northwest’s finest 1/10th scale offroad drivers would once again meet up for a last showdown and make claim for the series overall championship title. 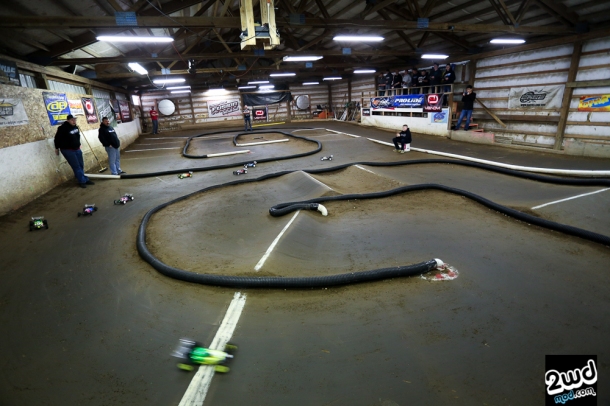 When I say, “Saving the best for last,” I don’t mean that lightly. The Four Season’s track crew did an awesome job providing the racers with, IMO, the best track of the series. It was fun, technical, simple, yet challenging. It also had the best flow out of all the tracks this year and only heard praises up and down the pits. It is rare when you get a track that is simple enough that every car on the track can take the same lines, but have totally different times. Every jump was make’able by stock and mod, yet stock and mod cars would be separated by over a second. It was a fantastic layout that only got better as the grip came up challenging all drivers to the very end. Thank you Gary and the guys at Four Seasons for all the hard work making the last race the most enjoyable! 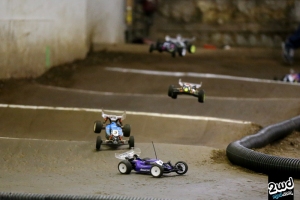 Novice — It was a late decision to open up Novice for the series, but I’m glad it was done. The future of this hobby stems from racers like these that are willing to dedicate the time and effort to enter a 2 day race that could be quite intimidating. Congrats to 1st place winner Kyle Goetz, 2nd place finisher Bo Dominguez, and 3rd place Lance Sponberg for taking part in the finale race and hope to see you again next year on the tour!

17.5 SC — SC is always exciting through and through as the trucks bump and grind more than any other cars making it exciting and fun to watch when the action is close. By running all 3 stock classes, Jason Gainey would make an attempt to do the triple and with home track advantage on his side, the feat could very well be possible. Driving smooth and clean all weekend long, Gainey would win A1 and A3 to take the win in stock SC. Young and talented Jackson Andres would finish 2nd with a 1st and 2nd. Mike Olivera has been showing much improvement with each race and would be your 3rd place finisher.

Stock Truck — Throughout qualifying, Jason Gainey would make a statement by taking TQ honors showing he would be the one to beat. In the mains, Gainey would drive with the same confidence and win A1 and A2 taking the race win. With the 2nd, 3rd, and 4th place finishers having the same points, it would come down to the tie-breaking and your 2nd place finisher would be Brandon Dyche. Losing by a small margin on the tie breaker, Kenny Root would earn an awesome 3rd place finish.

17.5 2wd — Completing the coveted triple crown isn’t an easy feat. However, Olympia’s Jason Gainey was heading in the right direction with competitive victories in stock SC and stock truck. After a “not so good” finishing result in A1 of 2wd stock buggy, it looked as if it was going to be an impossible feat. However, Jason strapped it up by winning A2 and A3 to take the race win and successfully completing the triple by winning all the stock classes.  Congrats to Jason Gainey on a marvelous job all weekend long. Your 2nd place finisher, Brad Hamer running a B5M, also had a horrible A1 with an early crash that put him last after the 1st lap. With a will of stone, Brad would come back in A2 and A3 finishing 2nd in both and thus 2nd for the race. Fusion Graphix’s Tyson Blood had the fastest stock buggy of the weekend and posting times that were very competitive to 2wdmod. With mechanical issues in his last two qualifiers resulted in Tyson qualifying 5th overall. After finally sorting out the mechanical issue, Tyson was back on form and finished 3rd for the race.

4×4 SC — Unfortunately, only 3 4×4 trucks showed up so everyone got a trophy! I should have put a truck body on my 4×4 buggy! Anyways, still a great race and great job by Chris Gould in 1st, John Stolz in 2nd, and Kenny Kizer in 3rd. 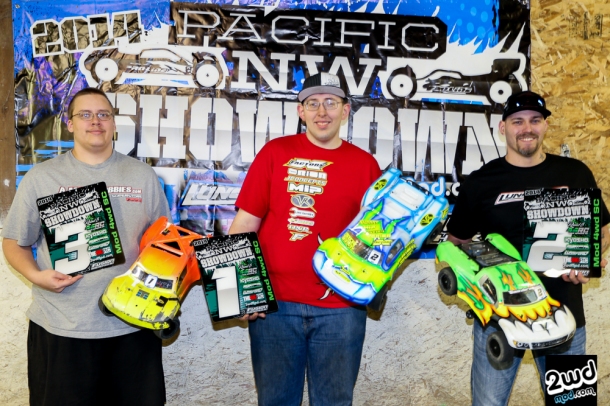 4wd Mod — Was a fun race to be a part of and I’m sure to watch as well. Olympia’s Chris Gould would pilot his B44.1 in dominating fashion and only needing 2 mains to decide the race winner. Putting down the fastest lap and runs, he was on fire all weekend long in 4wd so congrats to Chris for taking the win. Kyosho’s Roger Seim would be a point off Chris taking 2nd and Derek Rasheed wrapping up 3rd place.

2wd Mod — Team Associated’s Luke Smith was on the back foot at the beginning of the weekend having missed most of Friday’s open practice b/c of work, however being the talented young driver that he is, he was getting faster with each pack on the track.

A1 was a very close battle between NW’s finest with Luke Smith leading for most of the race and Mike Brown’s Schumacher KF right on his bumper for 5 minutes straight! With less than a minute left, Luke would make a small mistake that would allow Mikey Brown to take over the lead and win A1 in high pressure fashion. The precision that Mike had was remarkable and an awesome display of car control. With both these drivers showing such respect for each other throughout the entire race was a great example of 2wd mod racing at the highest level!

A2 was much the same with nose to tail battling among the top 3 drivers. However, this time it was Luke that was able to control the gap and not make the same mistake towards the end of the race that earned him the victory in A2. With Mike and Luke both having a win, it would come down to A3 to decide the race victor.

A3 was quite interesting as Mike Brown would make an early mistake this round that would shuffle him back in the pack and never having really found his rhythm to get going again. With that mistake, Luke would rise and claim A3 taking the overall victory. Team Kyosho’s CJ Ferrell would get 2nd in A3 wrapping up 3rd on the podium. 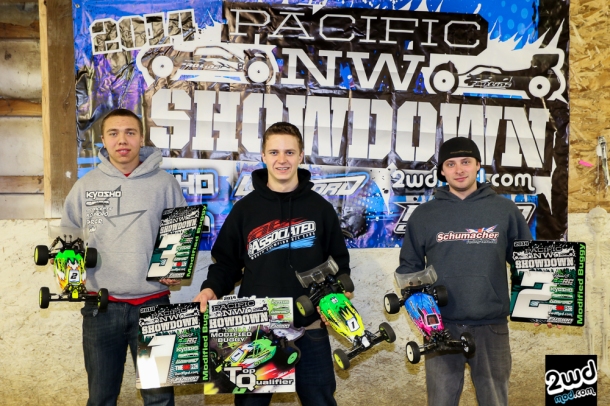 Thanks to Four Season’s Raceway and the track crew for doing such a fantastic job and hosting the Pacific NW Showdown finale race! It was an awesome time and definitely looking forward to next season. I would also like to thank Marty Barnes and Derek Rasheed for orchestrating the race series this year as I know it takes a lot of work behind closed doors to make this race series happen. Thank you also goes to Tyson Blood and Fusion Graphix for the awesome awards. It wouldn’t be the same with out you and everyone that was involved in making this series happen. 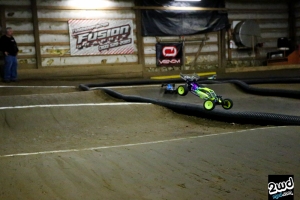 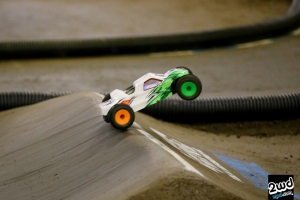 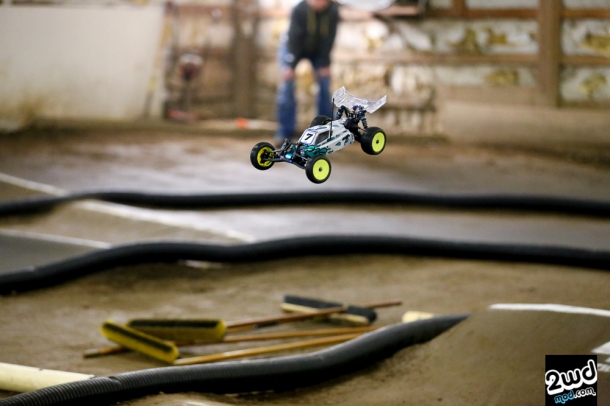 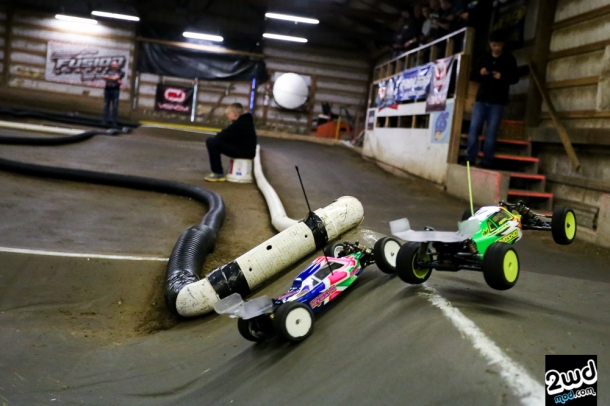 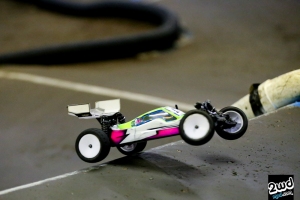 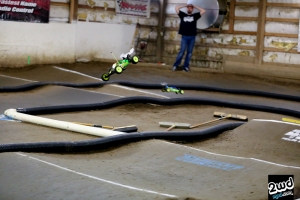 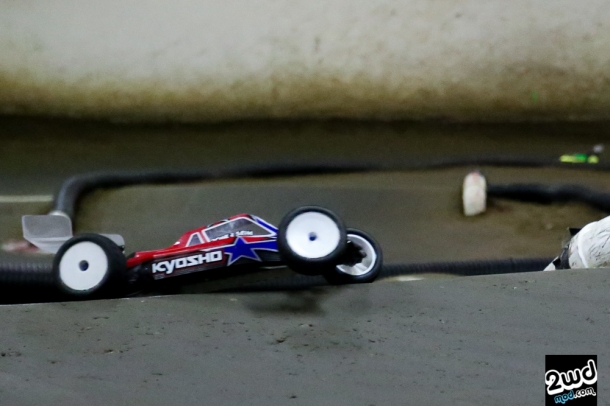 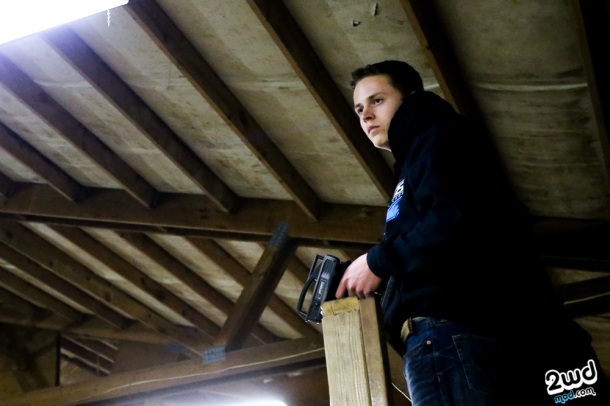