** Friends, if you would like to check out more podium pics, results, and videos of this race please check out RedRC’s Event coverage as they were doing live updates from the race. They have a fantastic site with awesome coverage and they help support the industry in so many ways.

I’ve decided to do my coverage a little differently so there isn’t so much overlap between all the news sites and readers having to read basically the same things over and over. Please keep reading below for my personal 2wd perspective on the JConcepts Summer Indoor Nationals.

Having been able to experience the 2014 JConcepts Summer Indoor Nationals in Chico, California, I can certainly say it has been one of my best racing experiences to date. This year’s round 3 host was none other than A-Main’s own Outback Raceway and if you know anything about A-Main, you know they’ve hosted some of the biggest racing events including the IFMAR Worlds in 2013. Luckily, the facility had AC in most of the pit area to keep the racers cool from the 100 degree scorching California sun and trust me, the AC made it a much more enjoyable experience. If this was an outdoor race, I’m pretty sure there would have been a lot of people passing out from dehydration. It was hot all weekend! 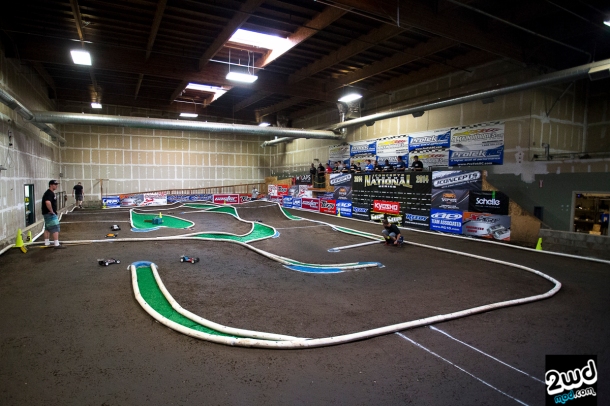 The track layout was awesome. Initial impressions from looking at online pictures, I thought it was simple. Getting here and seeing the track up close, I was completely wrong. There was a lot of elevation changes that went unnoticed from the online pictures. For instance, the entire sweeper was actually going up hill at a slight grade and then went back down hill into the ultra fast chicane section. The chicane, hip jump, and the triple were the key features to this track. All three obstacles took a lot of skill to successfully clear without losing time. Push too hard you’ll make a mistake and lose time. Take it easy and play it safe, again… losing time. But as always the cream rises to the top and those who can masterfully whip their cars into position and get the angle they needed to accelerate the moment their tires touched clay was the ones setting the fastest laps.

If you wanted to watch how run a fast lap, all you had to do was watch anyone in the A-mains. Everyone was flyin’. The field was basically a mini nationals and if Tebo, Phend, and Cav would have showed up, it would have definitely been a field worthy of ROAR national caliber.

This weekend, people’s eyes were upon one man. If the nickname wasn’t already owned by “Bubba Stewart”, I’d be calling him the “Fastest Man on the Planet.” Often times he’s untouchable on fastest lap, Ryan Maifield’s debut race for TLR was going down this weekend. Having just switched to Orion electronics and TLR cars, Maifield needed to adapt quickly to his new gear and the questions was……… how would he do? Could he win right off the bat? Was it possible? Or was this just a ‘feeler’ race for him? Either way, every time RM hit the track, it seemed like the gallery grew in number. Once his name was announced over the intercom, the room instantly started to fill up and all eyes on just one car. It was contagious. RM fever was breaking out! 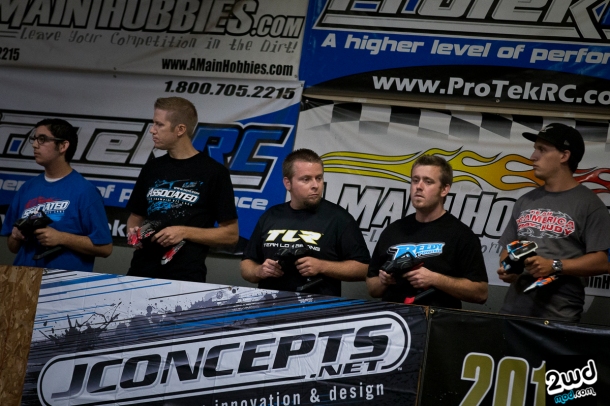 In practice, RM didn’t set the fastest times. He was still figuring stuff out while guys like Hartson, Rivkin, Vik, Moller, Root, were all looking faster and I wasn’t sure if Maifield was going to up his game and get things sorted or not. But with every pack, you could see him starting to figure it out and getting more comfortable with the car. After a minor glitch on Friday night seeding, Maifield ended up seeding 4th overall. Fastest in practice, Hartson had the fastest 3 consecutive laps, which meant he would be leading the A group out. Closely behind him was Teammate Spencer Rivkin and TLR’s Frank Root.

In round 1 of qualifying, it would be Ryan Maifield who ended up putting in the fastest timed 5 minute run, followed by Tyler Vik running his C4.2 Centro and Mark Pavidis’s TLR 22 2.0. As they ran the only 20 lap runs, behind them were 4 drivers with 19 lap 5:00 flats! Talk about competitive!

Round 2 looked much the same with a few drivers shuffled around just below RM. Improving from his 1st run, Maifield started to find his groove with his 2wd. The car looked better, he was able to drive it harder while still maintaining a high level of consistency. Maifield was rocking and ended up TQ’ing by 3 seconds over his protégé, Team Associated’s Spencer Rivkin. Defying all the misconceptions of age, Mark Pavidis would end up in the 3rd spot! What a showing for the former World Champ as his iconic paint scheme flew around the track! Mr. AKA was dialed.

After TQ’ing 2 rounds, Maifield had already sealed it up, but chose to run anyways. I’m sure it was try some setup changes to the car or scrub a set of tires in. However, round 3 went to Team Associated’s Chris Jarosz. Taking a risk and choosing to run slicks, the gamble paid off as he set the fastest time out of the group. The idea to run slicks had been on people’s minds, but with tire and setup tips from Brian Kinwald, you can’t really go wrong. Putting in the 2nd fastest time was the young 15 year old phenom, Spencer Rivkin. World Champion, Hartson would place himself 3rd for the round.

A1 – The build up to this race was crazy. As the drivers warmed up, the room filled up with anticipation. There were no open spots to watch the action go down in A1. Everyone in the room was eagerly waiting for the sound of the tone! Have a look below and thanks to RedRC for their video coverage. Have to give it up to the youngster, Spencer Rivkin, for pushing hard all the way though the main till the very end. Great job Spencer!

A2 – In much of the same fashion in A1, Maifield and Rivkin started to gap the field and continued their own battle. I have a hunch this rivalry is only going to get better over the years and eventually teeter towards young Rivkin as he gets stronger. But for now, with superstar style, Maifield still puts on his 2wd clinic. Watch A2 for yourself!

A3 – With Maifield winning A1 and A1 in slayer fashion, the rest of the bunch battle for the finishing order as he sat out and watched. I’m sure he was rooting for his boy Spencer to deliver and finish on the podium with him. Watch the video to see what happens!

I couldn’t imagine the amount of pressure Maifield had on his TLR/Orion debut. I must have been immense. Most drivers would have been just happy with a top 5 finish and then go on to making excuses like, “Well, it was my first weekend out with the cars so I struggled a little getting them dialed.”

For Maifield, he wants to win. He doesn’t want to be 2nd or 3rd. He’s not out there just to have a good weekend. It’s not enough and I can really respect that. What is even more impressive is …..  with all the pressure, he was able to deliver and he delivered in a big way for TLR, Orion, and mostly for himself. The doubters and haters were all silenced and not by JC bodies…. He TQ’d and won in 2 mains and made the best statement he could make. Not only did he win 2wd mod, but also swept mod SC and 4wd mod as well. If this is a glimpse into what’s to come…. then the rest of the pros should be worried because he’s only going to get faster. 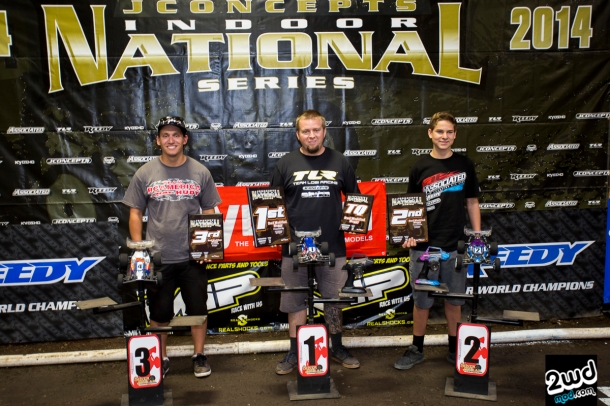 Rounding out the podium in 2nd place was Team Associated’s hottest driver, Spencer Rivkin. I have to say he was REALLY impressive to watch. Only 15 years old and at the same speed as Maifield in 2wd, but just had a tiny mistake while trying to pursue. A3, he clearly showed that he was the 2nd fastest driver that day by winning in strong fashion. Congrats to Spencer Rivkin for an outstanding 2wd Mod performance!

3r place was none other than Tyler Vik running a Centro C4.2. For those who ditched their C4.2’s for less than $150 bucks all decked out, the car was surprisingly competitive and beat a lot of B5Ms. In the right hands, the car looked fantastic and seemed to match his smooth driving style quite well.

Congrats to all the 2wd Mod drivers who attended. More than 60 cars in just 2wd mod and a G-main to boot! Huge thanks to A-Main and JConcepts for hosting such a killer event. If the show makes a stop in your neck of the woods, I’d encourage you to go race and experience it first hand!

Here are some other 2wd pics. Thanks for reading. 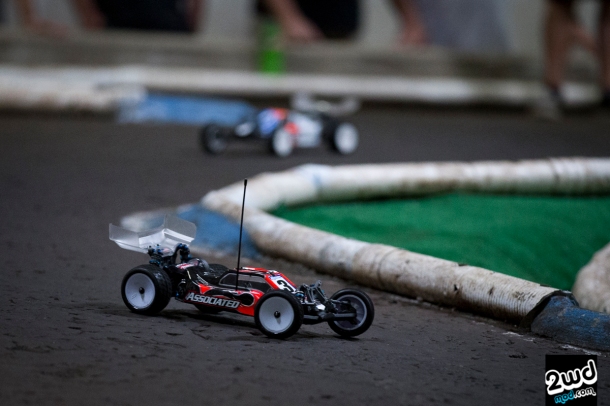 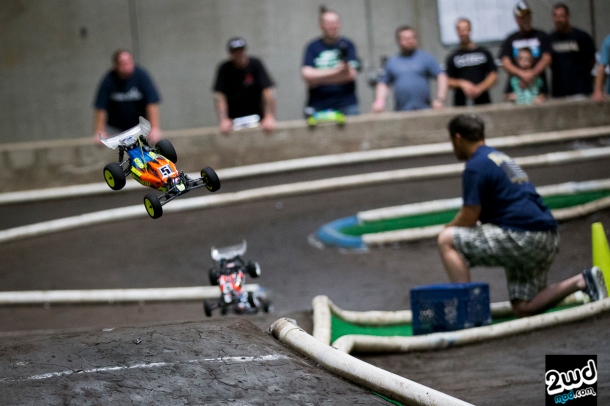 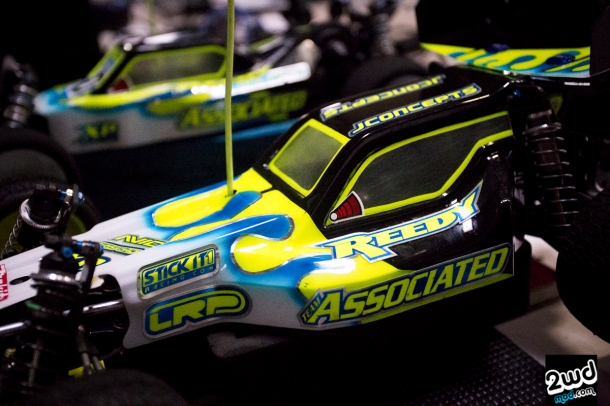