Round 2 of the Winter Indoor National Series has seen an unexpected rise of the young, fast, and talented racers like Nick Gibson. The Team Associated/JConcepts driver had a near flawless run with just 2 minor incidents with traffic, but was able to climb his way to the front and put in the fastest time of the round with a 19 lap 5:08.35. Having not changed his car from his first run, Gibson said he was “glad to have a much better run than round 1,” and was much happier with his performance.

Putting in the 2nd fastest time for round 2 was Kyosho/JConcepts’ Mitchel Gardner with a 19 lap 5:09.12. The 20 year old Kansas City native improved upon his first round of qualifying from a 4th to a 2nd and is sitting pretty before we enter the final round of quals.

Once again, Team Associated/JConcepts’ Michael Schoettler put in a fine drive and was able to secure another top 3 run with a 19 lap 5:10.09. With a 2nd and a 3rd, Schoettler has to decided to not play the safe card and has made a few changes to the rear of his car for the next round of qualifying. Whether it works out or not, Schoettler plans to try and “find a little more speed and drivability” for tomorrow’s main.

In the 4wd modified class, Schoettler once again took TQ honors in round 2 securing his overall TQ for the class. Having the fastest 4wd on the track, he has the luxury to sit out for round 3. However, he has decided to run his third qualifier to test a few more setup changes to get ready for tomorrow’s mains. Going with more brakes on the ESC and less wind angle in the back, Schoettler wants to see if he can further perfect his B44.3’s performance.

On TQ pace until the last 2 laps, TLR’s JP Richards was able to finish 2nd for round 2 with a 20 lap 5:14.04. With 10 cars qualifying on a small track, Richards had issues as he was making his way through traffic. Taking 3rd was Team Associated’s Michael Twilling who put in another stellar run and again on the verge of a 20 lap effort with a 19 lap 5:00.24. Twilling has two 3rd place finishes.

All eyes were on Team Associated’s Brent Thielke once again in the modified truck class as many are interested in seeing how the T5M would perform. Stealing the show in qualifying however, was once again JP Richards putting his TLR 22T 2.0 to the top of the time sheets with a 19 lap 5:14.69. Having 2 1st place finishes, Richards locks up TQ and edges out Thielke for top honors in qualifying. The Team Associated team manager was just shy of a 19 lap run and ended up with a 18 lap 5:01.93. Finishing 3rd for the round was X-Factory’s Justin Driemeier with an 18 lap 5:07.3

Here a few more shots from round 2! 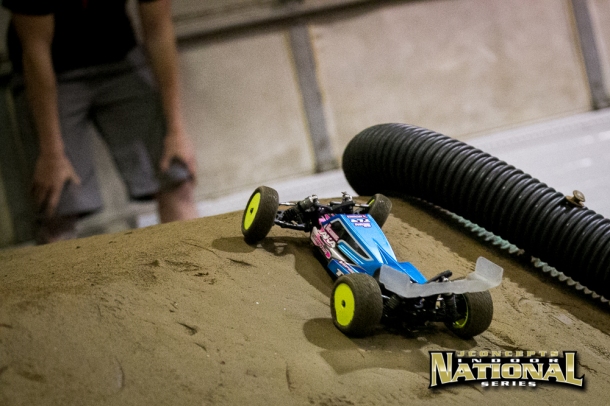