Coming off a win at CRCRC in Ohio and also setting the fastest times in Thursday’s practice at the Reedy, Tebo’s car was definitely hooked up. However, the Reedy’s invite format doesn’t always cater to the faster car and driver. It is crucial to make the most of the random grid starts especially when you start in the back half of the pack. Sometimes you can get through and then sometimes you’re trying to claw your way to the front, but a crash or two in doing so and you can kiss your chances of success goodbye.

Here are a few shots of Tebo’s car courtesy of NeoBuggy. 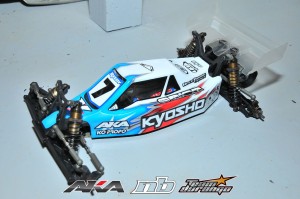 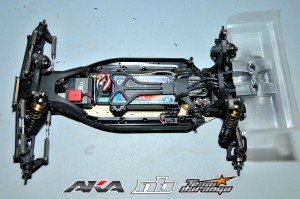 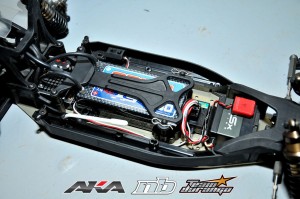 With a great picture of the chassis, you can see that Jared has gone full shorty pack for this race instead of the optional WTS or full pack. When the grip is good, shorty packs just accelerate so much better because of the lightness of the car. He is also running a full size servo, the mighty KO RSx servo. The layout is streamline and everything that’s got a bit of meat is mounted down the center line. By running the shorty pack, he is now able to mount his receiver right behind his servo to keep everything nice and tidy and avoid cluster bombing the side rails. I’ve gotten a lot of questions about Jared’s battery brace. I believe it is the prototype batt brace and he’s just using it b/c it’s different than what everyone else has. I don’t it being more functional. Personally, I think it looks worse than the stock brace so I’m not that interested. 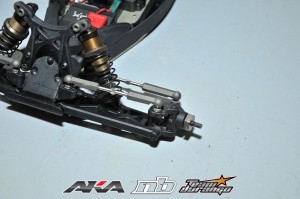 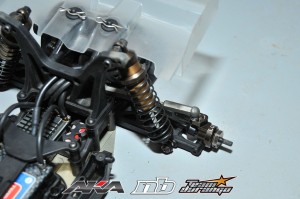 Let’s take a look at the front of his car. I notice he’s running the caster blocks set to narrow and using a wide hex to compensate the width differnce. It’s really hard to tell which front suspension mount he’s using because theoretically he could be running the the RB5 sp2, the rb5 wc narrow mount, or the RB6 front mount in combination of the different arms as well. For the rear, Tebo has been running the RB5 1 hole arms with the aluminum hubs. This seems to be his “go to” configurations since he’s been running it this way at multiple big events now.

I’m really excited to see what else Kyosho decides to do with the progression of the car. What will be the next fad? The car is already soooo good as it is….but can only get better.

Thanks again to NeoBuggy for the usage of their pictures.