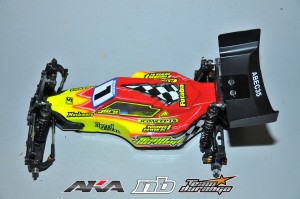 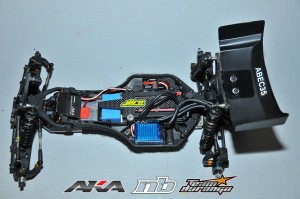 The outgoing Reedy Champ’s car looks much like it did last year. Being a JConcepts driver, Jorn sports the Finnisher aero package including body and wing with max wicker cut out. On his wing, he’s using an extra piece of plastic along with wing mount pacers. I’m guessing this is to stiffen the wing from flexing at high speeds and giving the car more consistent high speed down force. Unfortunately, I haven’t had a chance to drive one of these buggies yet, but from what I hear they have a lot of natural traction and obviously capable of winning races. Looking closely, it looks like he’s running a polished aluminum chassis for weight reduction! Ha, just kidding as this is probably for “bling” purposes. Interestingly enough, the layout of the car is in the typical fashion and not everything inline. Left side pod is his ESC and the right side pod has his receiver and down the center is a shorty pack placed pretty far back. I’m wondering when we will see the DEX210 with the center mount ESC via battery strap or custom bridge and the receiver mounted behind the servo? Will the DEX210 also follow the “longer chassis” design trend? 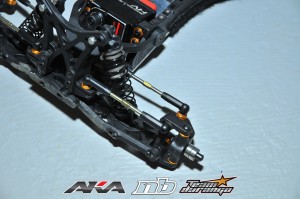 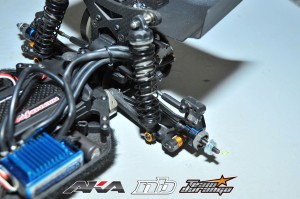 Moving to the front of the car, it looks like he borrowed turnbuckles from the AE team with different ballcups. I know Durago’s ballcups have the words “Durango HD” molded into them so I’m not sure what ballcups these are, but love the holes in em for easy adjustment! Maybe new prototypes?

On the rear of the car, you can notice the new “special hubs” in anodized blue and pen black! It looks like Jorn is spending a lot of time in the AE camp these days and is running their aluminum hub, plastic tower, and CVA’s. Has anyone tried this out yet? Last thing I notice is the carbon fiber rear tower over the plastic molded tower which definitely looks trick!

Photos courtesy of NeoBuggy…..thank you!