The Pacific NW Showdown Series is not just about racing, but also about reconnecting with friends from around the northwest for a friendly, competitive, top tier battle to see who is the fastest in the northwest. This year, the participating tracks are Olympia, Tacoma, Portland, Bremerton, and Albany. The race format is open practice on Saturdays from 9am till 5pm and running 1 round of qualifying starting at 5:30pm. On Sunday, there are 2 more rounds of qualifying and then lower mains will run to allow bump ups into the motocross style double a-mains. The opening round was held in Portland, Oregon on Nov. 9th and 10th……Let the show begin!

Since this site is dedicated to 2wd cars….. I must apologize for not being able to cover all the different classes out there, however it would be a goal of mine to do so later. Actually, it would be a dream come true to tour with Scotty Ernst and his series promoting racing and the fun and exciting world of RC cars. I’d have to pinch myself if that ever happened. Anyways, I figured with this 1st race, this would give me a good idea of how much I would be able to stretch myself as I’m not getting paid to do any of this. This is for my vision and out of pure love for this sport. 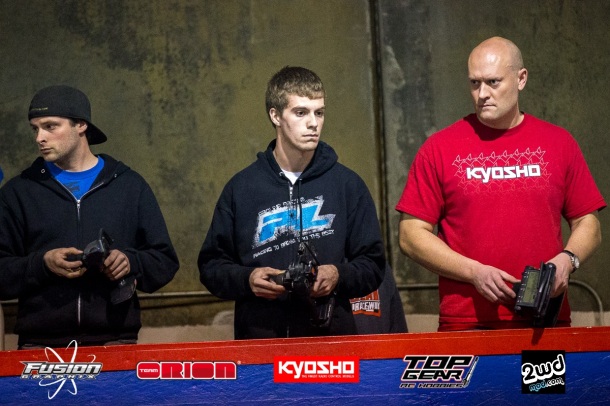 Qualifying was very close, but shining through the pack was Team Kyosho/Orion’s Andy DiBrino setting the only 19 lap runs throughout the three rounds of qualifying. Shaun Dunlap, running a C4.2, was close on his heels running just 1.2 seconds shy of a 19 lap run. In watching all 2wdmod rounds of qualifying, Shaun wasn’t unable lay down a perfectly clean run and had a few minor bobbles and lap traffic playing a factor. Kyosho/Orion’s team manager, Joe Pillars, took the time out of his busy schedule and made an appearance at the showdown race and found himself among the NW’s best and qualifying in the 3rd spot. While racing, he also had to manage a talented field of Kyosho’s young guns including CJ Ferrell and Austin Seim, which rounded out the top 5 spots in a very competitive mod buggy class at Top Gear Raceway. 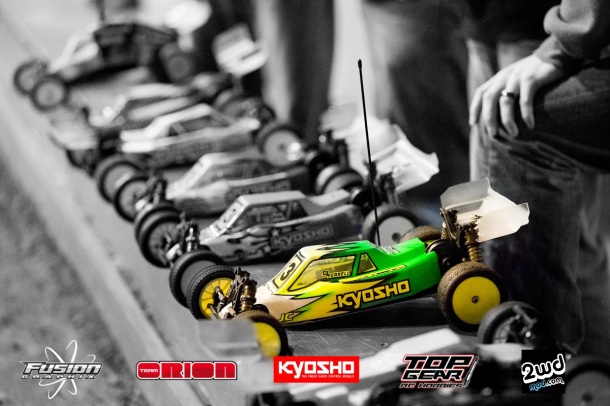 Stock buggy is one of the most exciting classes to watch. The racing is sometimes even better than that of mod buggy because the power level is in the controllable range for more drivers. Jason Gainey with his C4.2, would rise to the top in qualifying posting a 4 second advantage over Top Gear’s own Chocco Ferrell running his mid-motor RB6. In the 3rd qualifying spot was Brad “The Undisputed” Hamer close behind with his traditional rear motor B4.2. Tony Dolin, Battle Man himself, would make the drive from up north and taking the 4th spot with his mid motor Durango Dex210. Rounding out the top 5 would be Johnny Chase. From 2nd to the 5th spot, there was only a 3 second gap!

A-Mains
2wdmod
The big question for mod buggy A1 was if this was going to be the continuation of perfect driving from Andy DiBrino. Having made no mistakes throughout qualifying, it was now time to see if the pressures of the mains would get to the talented 19 year old. Would there be a big enough mistake for other drivers to capitalize on? After 6 more minutes of racing the answer would be …. NO. Mistake free, Andy DiBrino would lead the pack and claim victory in A1 by over 7 seconds. On the 2nd to last lap, Shaun Dunlap would tangle with lap traffic that allowed Joe Pillars to be right on Shaun’s back bumper and then making the pass in the very next corner. However, that put JP on the outside for the next corner and Shaun displayed very technical driving and counter attacked and took back the 2 spot and held JP off for a close race for 2nd place!

2wdstock
Leading from TQ, Jason Gainey led from start start to finish and was able to control the gap to 2nd place.  As Chocco was closing the gap and bringing himself within attacking distance, he nosed-in on the step up jump requiring him to get cornered. That allowed Gainey to have a comfortable lead and drove to victory without any pressure. Chocco would finish 2nd followed by one of the only rear motor cars in the field driven by Brad Hamer. Rear motor seems to be among a rare breed for indoor clay racing these days.

Finally coming down to the wire, A2 proved to be everyone’s last chance to dethrone the dominance shown by Andy DiBrino and his Orion powered Kyosho RB6. Nonetheless, this day proved to be Andy’s day as he drove even faster in A2 than in A1 by 3 seconds and posting the fastest lap done by a 2wd buggy with 15.9 second lap. Congrats to Andy DiBrino, Shaun Dunlap, and Joe Pillars for rounding out the top 3 podium spots to the start off a fantastic race series in the Pacific NW.

2wdstock
The stock buggy class proved to be an interesting main in A2. Before finishing the first lap, 2nd place car Chocco Ferrell would roll over that allowed a few cars to squeeze by….one would be Brad Hamer who was now able to focus on tracking down the race leader, Jason Gainey. The order would remain the same until the about the 3 minute mark as Gainey would come short on the mini double and getting his car stuck. Brad would capitalize on Gainey’s mistake and take over the lead and pushed hard to run away and claim the victory….. perhaps even the overall 1st place depending on where Jason Gainey would finish. Brad did what he needed to do and it would come down to the final laps as Chocco and Jason would battle for 2nd. Getting on the sweeper, Jason taking a wide line and Chocco the narrow inside line…the two would eventually touch as Chocco did a little counter steering to avoid hitting the pipe resulting in the two drivers tangling and Jason spinning out. Chocco waited, but the questionable contact would put Chocco 2nd and Gainey 3rd……thus giving Brad Hamer the overall victory in a hard earned fight for the coveted 1st place trophy! 2nd overall was Jason Gainey and Chocco Ferrell takes home the 3rd place trophy. Great job guys!

Congrats and thank you to everyone who was a part of making this race a fantastic race weekend. It is the great community of RC racers that makes racing fun no mater what event you go to or how big the event is. Let’s keep the positive vibes going and hope to see you all there at the next round of the Pacific Northwest Showdown in Bremerton, Washington. Special thanks to Top Gear Raceway and track crew for a fantastic track facility, Marty Barnes and Derek Rasheed for organizing the race, and Jim Dunlap for doing a fantastic job at RD’ing the event. 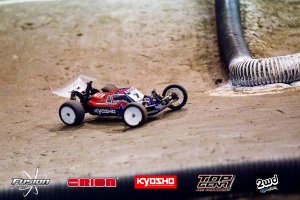